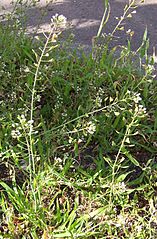 The Benefits of Shepherd's Purse:   Though shepherd's purse is a common botanical herb utilized in herbal treatments, the fact is that, its healing benefits are in need of more investigation. Shepherds purse was named after its heart shaped leaves bearing resemblance to the knapsack of a shepherd.

In some parts of the world, shepherds purse is considered a weed, but we know better. Shepherds purse has a number of herbal benefits that the modern-day herbalists utilize for a number of medical applications. In fact, it has been used since antiquity to help with a number of ailments.

It is easy to grow, even in the poorest soils, but it will grow to 2 feet in rich soil.
Shepherd's Purse Seed

Here are some other names for this herb:

There may be more common names, but those are the most commonly used.

Shepherd's Purse is a highly renowned ingredient used in a variety of Far eastern dishes. In China, Korea, & Japan it is used in recipes in a number of different ways. Curiously enough}, it is used in Chinese dumplings.

The flower, leaves, and seeds are all edible on this plant. The leaves, in fact, can be eaten raw or cooked.

Shepherds purse is one of the earliest greens in early spring. As a pot herb, the leaves are best eaten before the flower stalks appear.

Some people consider it to have a bite to its taste much like a radish, but I really don't see it being even that hot. It is very mild in my opinion. It is uncharacteristically mild for a mustard green when it is young and tender. It is also very good to add to salads, stews, soups, and sauces.

A lot of birds love Shepherd's purse. Chickens will devour the whole plant like there is no tomorrow. In fact, it will cause the yolk to change color and have a stronger taste when the chickens eat it. Grouse's, chaffinches, and gold finchs also like to eat the seeds.

It has several alkaloids in its volatile oils. Alkaloids can accumulate in the blood so beware of taking it long term. It is high in choline, thiamin (B1), inositol, and fumaric acid. It also has vitamins in riboflavin (B2) and ascorbic acid (C) along with the minerals calcium, phosphorus, and potassium. There are also some low amounts of vitamin K, beta carotene (vitamin A), iron, niacin, and the glycoside rutin.

The benefits of herbs are many, and Shepherd's Purse is no different.  The medicinal use of herbs since antiquity is well known and continues to this day.  When you use nature's remedies, it can make a big difference in your health, but keep in mind that herbal solutions are much like anything.  Educate yourself on herb cures & plant remedies, it pays to have knowledge of the advantages of medicinal plants like Shepherd's Purse.

As an herbal treatment, it is has herbal uses as an infusion from the dried material, used fresh, or as an extract. Because it is a vasoconstrictor, styptic, astringent, blood coagulant, diuretic, and anti-scorbutic, it is very hemostatic (which means it can stop bleeding). Used as a vulnerary medicinal herb to treat nose bleeding by applying the juice by using a cotton ball in the nose.

Internally, it is used as a natural remedy to help in bleeding problems because of its coagulatory effects. It is used to help women with menstrual cramps.

It is a medicinal herb that is often used for herbal relief during or after childbirth in women to help with bleeding issues. It has a protein that acts like the hormone oxytocin. This protein acts by constricting the smooth muscles that surround blood vessels.

It also can help alleviate nose bleeds and blood in urine. Externally, it also can be applied to wounds where bleeding or bruising occurs. Some people use it to treat varicose veins.

It is used to treat muscle problems and circulatory issues, especially in helping blood pressure.

It is also utilized to treat urinary infections associated with haematuria (red blood cells in urine) and menorrhagia (heavy menstrual bleeding). It naturally increases the volume of urine when you urinate because of its diuretic properties (due to the presence of mustard oil).

It is a stress relieving herb. Research on rats showed that Shepherd’s Purse extract caused a reduction in ulcers caused by stress.

It even has a mild antibiotic effect toward gram positive bacteria. In treating malaria, shepherds purse extract has been used as a quinine substitute in a tight.

In ancient Chinese medicine, it was thought to "brighten the eyes". It was used to treat common eyesight problems such as blurriness or spots.

It can be used topically to lacerations to stop bleeding and help the healing process to begin. On the skin, it has also been used to help with eczema and rashes.

There's been a lot of research into the interactions that they can have with other drugs so if you take other medications beware of possible side effects and speak to your doctor about this herb.

This information is not approved by the food and drug administration, and is not intended for anyone to use it to try to treat or prevent any disease without the help of a trained medical physician. This information is for educational purposes only.